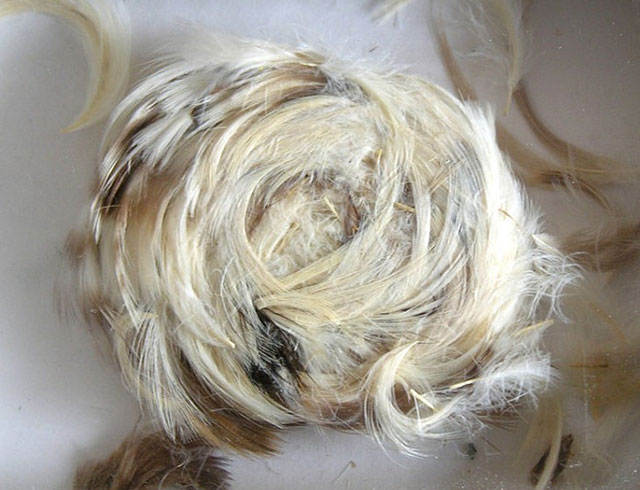 Angel crowns, more often referred to as death crowns, are an eerie piece of Appalachian folklore. Death crowns are created when a clump of feathers inside of a pillow takes the form of a crown when someone dies after falling asleep on their pillow.

These death crowns are discovered after a family member or friend either hugs the loved one’s pillow or lays down on it. They will notice a hard lump inside the pillow that cannot be smoothed away. Curious they cut the pillow open and find the mysteries feather crown inside. The crowns are neat and extremely tight. All the feather quills point to the center of the crown.

Appalachian folklore says that the death crowns are a sign for the family that their loved one has made it to heaven. Many families have taken great comfort from finding a death crown. Folklore also says that if a living person finds a death crown in their feather pillow they are not meant to have a long life. It is also believed that it is especially fortunate to find a death crown in the pillow of someone considered to be”less than deserving” because that indicates the individual has been absolved of their sins and will be allowed to walk through the pearly gates.

There are some that believe finding a death crown is a sign from the dark side. They think the crowns are evil omens that witches have cast on an individual and they immediately remove the crown and throw it into a fire.

When a feather death crown is found in the pillow of someone who has passed, it is carefully removed from the pillow. Then, Appalachian tradition says the family member must put the crown on display for family and neighbors. In the past, a death crown was shared in the local newspaper as an addition to the person’s obituary. Most families that have found a death crown in their loved one’s pillow store them safely in a box or display them in glass-topped cases. Some people have had glass cases made to display the death crowns.

Vera Taylor of Charleston, West Virginia has four death crowns that belonged to members of her family. She shared that “I inherited an old trunk from my dad. There were four inside the trunk. I guess they were pretty old because he didn’t know whose pillows they came from. He inherited the trunk from his mother who passed away in 1947. Dad had always told me that the person that died on the pillow went to heaven.”

The Museum of Appalachia has death crowns on display. The museum is located in Norris, Tennessee, just 20 miles north of Knoxville. They are a living history museum that replicates the pioneer and early 20th-century period of the Southern Appalachian region of the United States.

Some people believe that this phenomenon is caused by an electrical charge that leaves the body at the time of death. Others think that death crowns are miracles. We may never know the truth about death crowns, but there is no doubt that they are a strange addition to Appalachian folklore.

Stay up to date with other Appalachian region events and craft shows by following Got Mountain Life on Facebook, Twitter, and Instagram. Be sure to visit our events calendar often!