Many Appalachian communities are known for their homemade crafts and hand-carved toys, but did you know that they also invented their own games? Before TV and the internet, isolated mountain towns came up with their own entertainment, and some of those Appalachian games became a part of their region’s culture. Here are some Appalachian games you probably haven’t heard of before now.

The first game on our list is relatively new compared to the others. In the Appalachian Trail Game, players attempt to make the trek from one end of the AT to the other by collecting “Gear Cards,” and answering questions about local flora and fauna, survival skills, and trail etiquette. The Appalachian Trail Game was created in 2014 by Outdoor Edutainment, LLC, a small company based in the Blue Ridge Mountains of Asheville, NC. Its creators, Mark Hanf and Kristin Peppel made the game after witnessing the damage that careless hikers can cause to wilderness areas. They are partnered with the Appalachian Trail Conservancy, the American Hiking Society, and the Leave No Trace Center for Outdoor Ethics, and donate 5{c81ca3f6b47d12e1c39c99c5f24f4a0138260dd15eaf7743f5d45e15c35b5b24} of game sales to those causes. The AT Game can also be purchased in a more travel-friendly “Backpacker’s Edition” so you can keep yourself informed and entertained during your real-life Appalachian Trail adventures.

Rootball was invented at the Root Bar, a local dive outside of Asheville, NC. Rootball is similar to Horseshoes—players face off opposite each other and try to hit each others goalposts, but instead of tossing a horseshoe, contestants throw an oval shaped ring and a rubber ball. Points are scored if the ring or the ball hit the goalpost. Extra points are given if the ball ends up inside the ring, called a “Saturn.” Anyone landing the ring around the post, and the ball in the ring, automatically wins the game. Like many Appalachian games, it’s best played on a warm summer night with a cold beverage in your free hand. 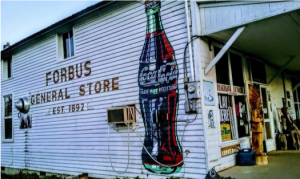 Forbus Pig is a card game that is only played out on the Cumberland Plateau in Tennessee. No one knows who started it, or how long ago, but Pig is as much a part of their culture as farming and fishing. Locals gather every day at the Forbus general store, which has been in business since 1892, to socialize, catch up on town gossip, and play Pig.

The game itself is similar to Hearts or Spades, with two teams of partners bidding on the number of hands they believe they can win. However, unlike those games, in Pig, the trump suit changes from round to round, depending on the outcome of the initial bidding, so you really have to be sure of yourself to win big.

The World Pig Tournament has been held at the Forbus general store since 2001. It is held at “High Noon” on the last Saturday in February. The winner is crowned “World Pig Champion,” and their name is etched into a plaque that hangs in the store, and has the name of every World Pig Champion engraved on it.

Flipperdinger is not just a game of skill, it is also a traditional Appalachian hand-crafted toy. A flipper-dinger is made of a short hollow reed with a wire basket at one end. The basket has a pair of metal rings, one above the other.  Tied to the ring with a short string is a tiny ball made of cotton or a corn-husk with a wire hook coming from it. Blowing into the reed moves the ball. The goal is to pass the ball through the lower ring and hook it on the upper one. Race your friends to see who can hook it first!

The last game on our list is not really a game at all! Play-party games were a part of Appalachian culture at a time when dancing was frowned upon by many mountain churches. In some towns, instead of having dances, the youth would gather for “Play-Party” games. During the games, people would perform a series of synchronized movements while singing with each other.

According to tradition, since there was no live musical accompaniment, the movements were technically a game, not a dance. Teens and young adults were the usual participants, using the games to get closer to one another. Many of these elaborate movement sequences later became Contra dance steps as dancing became more permissible.

Are there any Appalachian games we missed? Let us know in the comments!